Finding and installing the right transducer for your boat

An overview of all transducers in our range can be found in our category GPS & Chartplotters, sorted by manufacturer.

When you buy a new multifunction display or other instruments, a transducer is most likely not included. The reason being that there are a number of different models, which vary in material, frequencies and utilized technology. Which transducer is right for you?

What is a transducer?

A transducer is virtually the heart of a fish-finder or multifunction display. The transducer transmits sonic waves and receives their echoes; the time needed between transmission of the impulse and receipt of the echo allows the transducer to determine the type of surface and the depth of the water in that area.

Which material should I choose?

Transducers housings are available in different materials. A general recommendation concerning the most suitable material is impossible. It all depends on your boat’s material.

Plastic transducers housings are suitable for GRP or metal hulls. A plastic transducer should, however, never be used in combination with a wooden hull. Wood twists, expands and contracts and can damage the plastic, which can result in a leak.

(Stainless) steel or corrosion-resistant transducers housings are especially suitable for aluminum steel hulls in order to avoid electronic corrosion. For installation inside an aluminium metal hull, aninsulating fairing block is additionally necessary. Steel transducers are not suitable for boats where electrical installation is made with positive ground.

Bronze transducers are suitable for wooden or GRP hulls. Avoid them for aluminum hulls. The combination of aluminum with bronze, especially in conjunction with saltwate.

There are different types of transducers with different possibilities when it comes to installation. Below we will provide you with detailed information regarding thru-hull, in-hull as well as transom transducers, their respective advantages and disadvantages, including instructions for installation.

To ensure this, you can use a fairing block, for example when installing the transducer on one side of a V-hull. Transducers with a tilt angle are also available as an alternative, for example 12 or 20 degrees. This way the transducer beam is directly directed at the ground and thus can receive a stronger echo and deliver more accurate depth data. 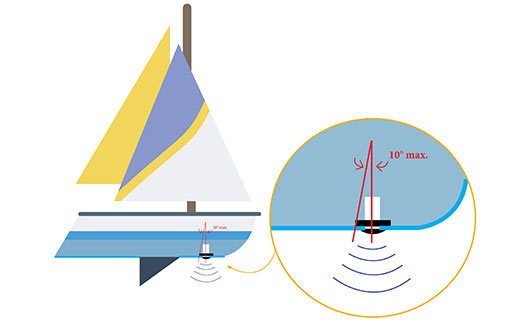 Choosing the right installation location: In order to correctly install the transducer, the installation location has to be carefully chosen first. The right location very much depends on the type of boat. However, the following points should be taken into consideration regardless of the boat type: 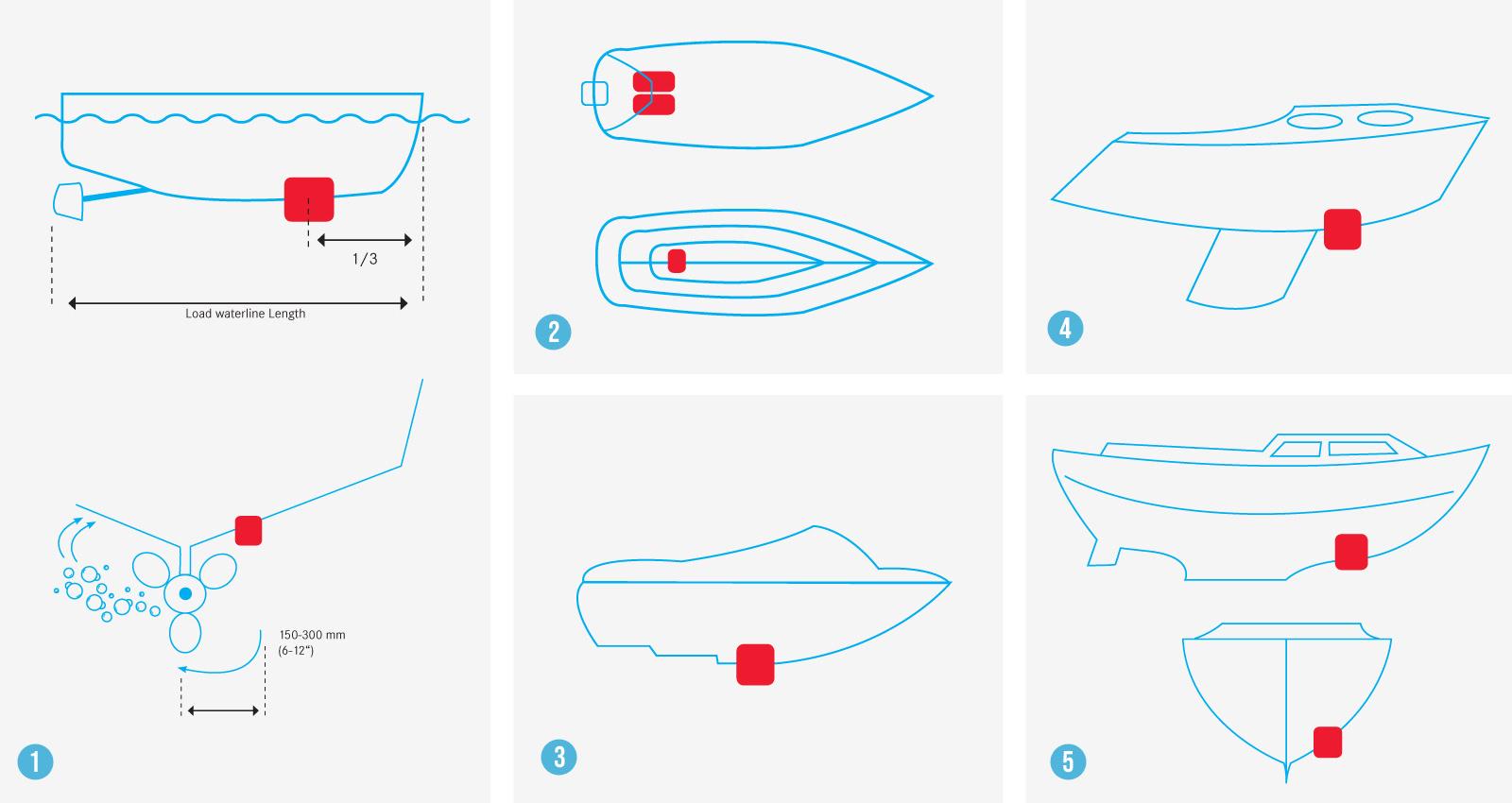 On sailboats, the transducer always needs to be installed in front of the keel and as close as possible to the midship line. If this is not possible on a full keel sailboat, the installation location should be on the end of the first third of the hull

On motorboats, the transducer should be installed at the beginning of the last third of the hull. Ideally you can find a spot near the midship line and in the area of the first stringer, preferably directly before the engine compartment.

For this type of installation of the transducer, the boat has to be on land. Never install a thru-hull transducer when the boat is still in the water.

Tip: mark the hole on the hull by first of all placing the drill in left-hand rotation. This will prevent chipping of the gelcoat. 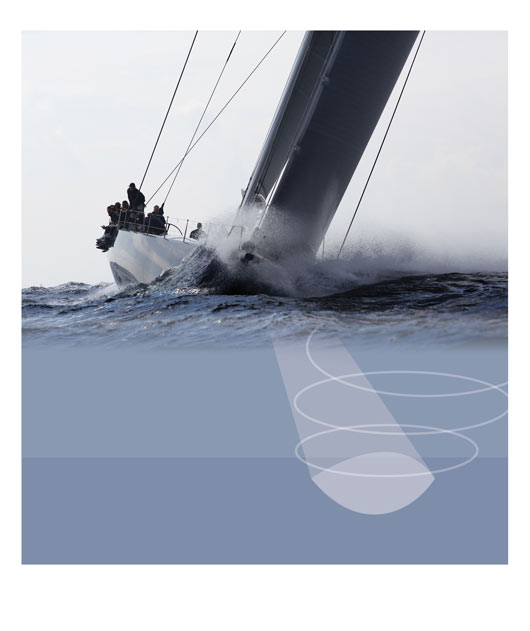 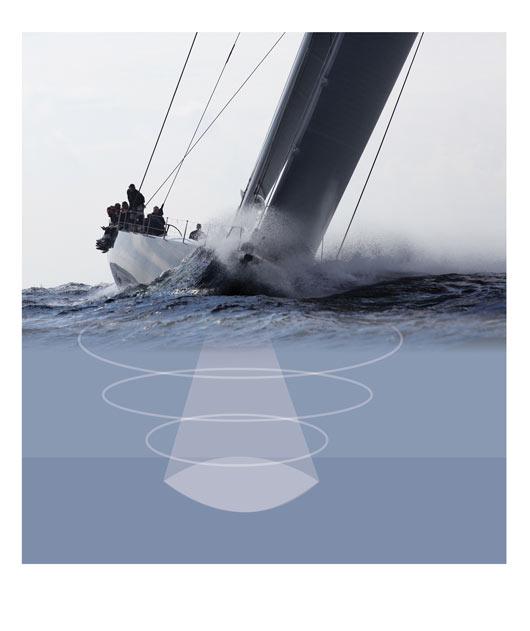 A suitable installation location should meet these requirements:

If these requirements cannot be fulfilled, choose a different transducer.

Make sure the cables are running properly, e.g. through protective tubes in the keel area or along the floor. Never shorten or cut cables without consulting an expert. This can cause damage to the transducer and lead to a loss in quality.

Make sure that the transducer centre line (yellow line) is at ground level (black line).

No hole has to be drilled into the hull for this type of transducer. The transducer is simply glued to the interior side of the hull (with silicone or epoxy) and the signal is transmitted through the hull. This type of installation is only possible in GRP boats, since the properties of GRP with regard to ultrasonic waves are similar to that of water. The big advantage of in-hull transducers is that the hull is not damaged and that installation can also be done when the boat is in the water. In addition, the transducer is protected against fouling and damage from stones or driftwood. An in-hull transducer is a good choice for trailer boats, boats with tiered hull design and other types of high performance hull designs, since there is no water resistance or potential for fouling with this type of transducer. The only disadvantage of this type of transducer is a weaker performance due to the transmission of signals through the hull. The maximum measurable depth is for example lower than with a transom transducer. It also needs to be taken into consideration that there are no in-hull transducers with integrated temperature sensors.

Regardless of the type of vessel, the transducer should preferably be installed upright. The transducer should have a maximum tilt of 5-10° in order to not distort the measuring results. In case of sailboats, it is also important that the transducer beam can transmit from the keel without obstacles. With a solid GRP hull, you need to make sure that the laminate is free of air bubbles or metal inclusions. 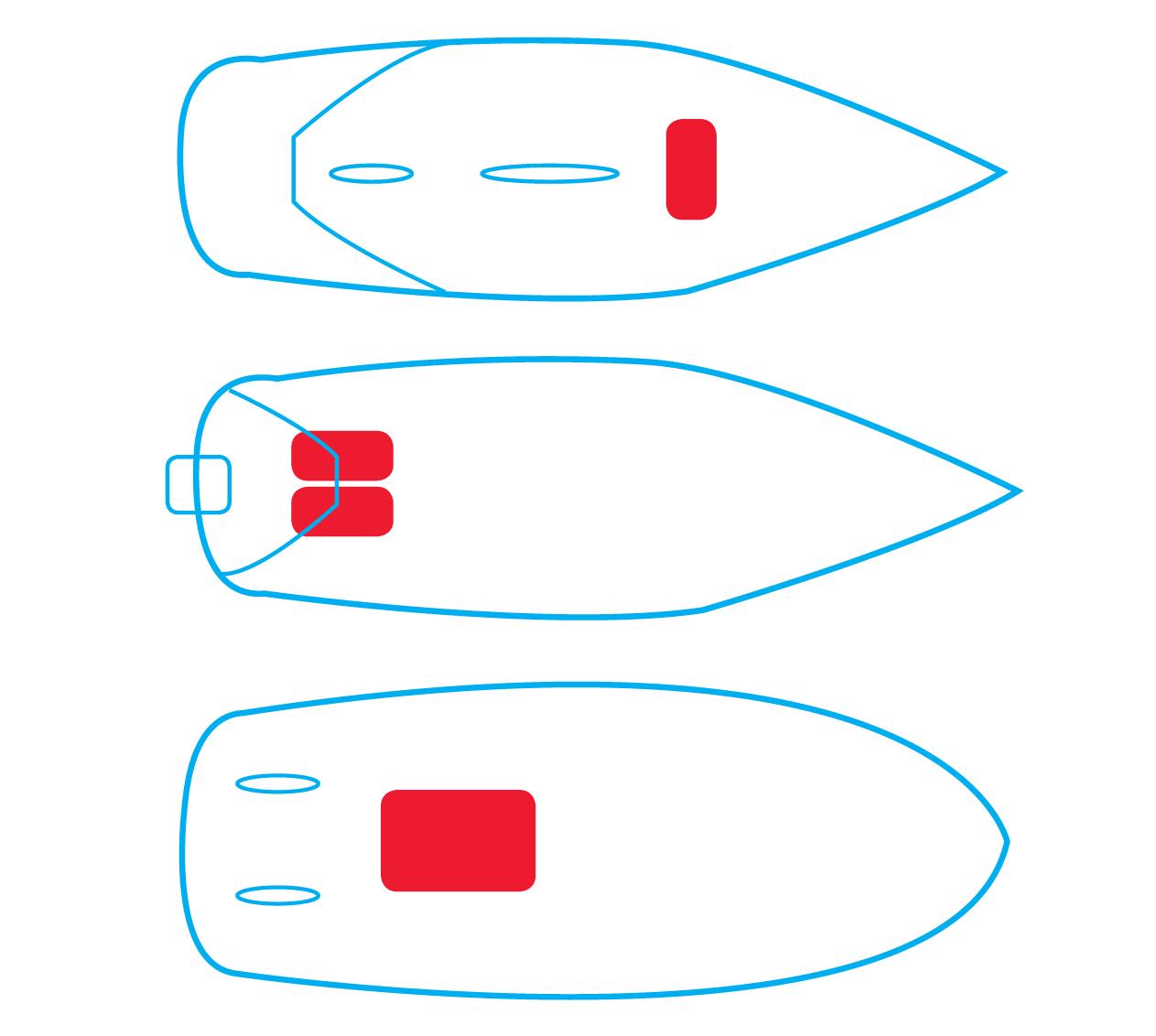 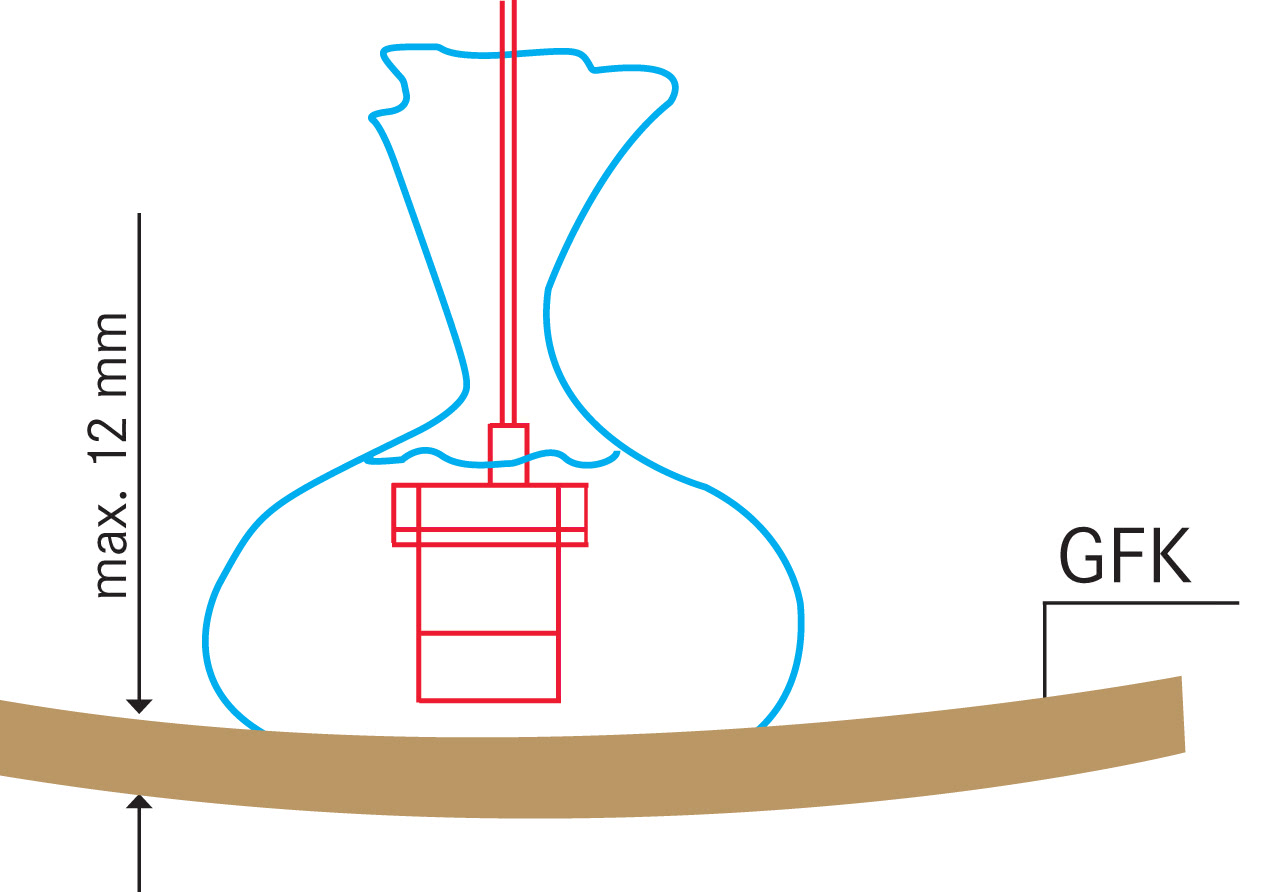 In order to find a suitable location for in-hull installation, we recommend the following approach:

In addition to the different transducer types and their installation, there are also various technologies for each type of installation; these can very much affect the quality and display results.

The traditional sonar operates with pre-configured frequencies. These are usually between 50 kHz and 200 kHz. The lower the frequency, the smaller the transmission beam and as a result a deeper measurement. In turn, the higher the frequency, the higher the transmission beam, which results in a shallower measurement. The resolution with high frequencies is higher than with lower frequencies. At higher speeds, it is recommended to choose higher frequencies as well. A frequency of 200 kHz is recommended for water depths up to 60 meters. Starting at 60 meters, we recommend a frequency of 50 kHz or 80 kHz. Dual frequency fish-finder combine low and high frequencies and thus offer advantages of both systems.

High frequency scanning sonar devices such as the Garmin Down Vü and the Lowrance StructureScan HD can scan areas with very high frequencies and thus create photographic images. You can choose between 455kHz for larger areas and 800kHz for smaller areas and a higher resolution. Raymarine CHIRP SideVision™, Garmin SideVü and Lowrance StructureScan HD can also receive images left and right from the boat instead of only directly below the boat.

A sonar or a transducer with Forward Scan Technology is capable of displaying the ground in front of your boat in 2D sonar images. This technology comes in very handy when looking for a suitable spot to anchor and also helps with not running aground in the process.

Due to increased energy reflection by the target, the CHIRP sonar offers a large improvement in regard to resolution and accuracy at greater depths.

Another advantage of a CHIRP sonar is an improved identification of targets, since information is transmitted in several frequencies, instead of only one. As an example, individual fish that are closely swimming next or on top of each other can be identified in this manner. In addition, living organisms can easier be distinguished from objects in the water.

CHIRP sonar devices are clearly less susceptible to currents. The CHIRP system creates its own frequency range for receiving echoes. This allows the CHIRP system to distinguish between true sonar echoes and disturbances. This technology is also equipped with improved target separation, due to which fish can easier be distinguished from their surroundings.

Displays the ground structure accurately in every detail at a wide viewing angle.

The lower the frequency, the smaller the absorption of the signal. This way the signal can travel farther before becoming too weak. The beam angle here is wider and can easily spread out and cover a large area. A lower frequency range is suitable for measuring greater depths of more than 60 meters. The resolution and target definition as well as susceptibility to noise is lower for these transducers than with high frequencies.

This frequency is ideal for locating fish in shallow waters.

This frequency offers the highest resolution, even at high speeds, and makes it easy to distinguish fish from objects. However, it should be taken into consideration that the depth of the measurement decreases with increased frequencies. This frequency range is only recommended for water depths of up to 60 meters.

Displays an almost photorealistic image of the ground at a wide viewing angle and a shallow depth.

Further considerations prior to purchasing a transducer

In addition to the above, you should also consider what type of data you would like to receive from your transducer. Are you looking for depth information or details regarding the speed or temperature? Multifunction transducers that combine all these features in one are available.

The individual sonar transducers also differ with regard to performance. The strength of a transducer signal (ping) is measured in watts RMS (Root Mean Square, effective value). The higher the performance, the higher the watt RMS value, and as a result improved transmission e ven in deep or dirty water, including more detailed images.